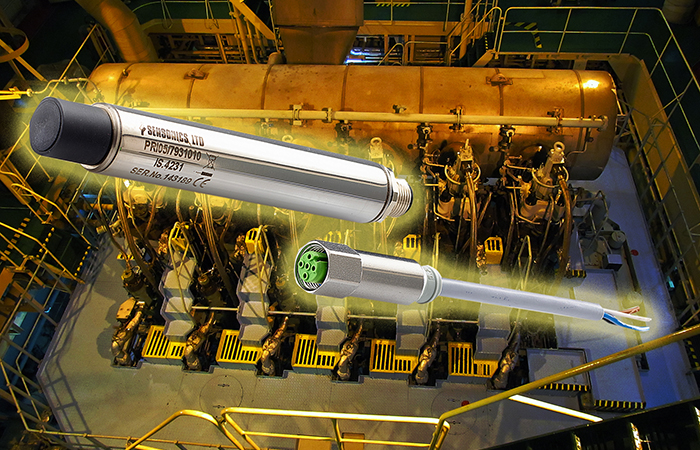 The PRI Series proximity sensor from Sensonics is a single probe assembly solution featuring direct processed outputs, eliminating the need for a separate driver. As there is no driver, extension cable or associated driver housing, the solution is more cost-efficient and easy-to-install, so capital and installation costs are kept to an absolute minimum.

Proximity probe systems are usually made up of a calibrated probe, extension cable and driver. The new PR l04 proximity probe system is a fully integrated probe with all these elements contained in the probe body. Utilising the eddy current principle, this combination forms a tuned circuit with the target material and variations in probe face to target distance are detected in this circuit by the driver, providing highly accurate vibration and relative positional measurements.

Sensonics has continued to develop the PRI Series which has further extended the applications for proximity sensing, such as a rod drop option for engine monitoring. This option provides both a dynamic output and bearing wear indicator by measuring the bottom dead centre (BDC) position of the crank of a reciprocating engine. The probe offers up to 4mm of BDC measurement range and auto-gapping LED’s enable easy installation and set-up. The bearing wear is captured through a sample and hold feature and is available on a 4-20mA current loop which avoids the need to use the engine speed (which may be variable) to capture the measurement and therefore simplifies the system.

Also, recent design enhancements has resulted in improved performance for less demanding OEM applications with operating temperatures up to 120ºC such as; industrial gearboxes, pumps, fans, blowers and hydro-generator applications.

Meanwhile, the 180ºC rated standard XPR04 probes with separate drivers are suitable for use on higher temperature machines such as steam turbines.

Higher reliability is assured thanks to no external driver and tuned cable assemblies, whereas coaxial connector interfaces can be a major failure point on standard proximity probe systems. This is because they are susceptible to ingress of oil and dirt which can result in intermittent connection through either improper installation or mechanical stress. Also the PRI option has no cable length restrictions compared to standard probes which are typically restricted to 5m and 9m systems due to the required tuned circuit between the separate driver and the probe. With the PRI option there is no such restriction as they can drive long cable distances (>500m) to the connecting equipment.

It is available in a standard 10m cable for direct termination to the connecting equipment or a local junction box and by utilising the same 8mm diameter tip (as per API670 proximity probes) the PRI case body is available in the standard M10 and 3/8” UNF variants providing an easy retrofit option.