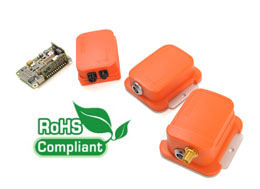 Xsens has launched a revision of the popular MTi and MTi-G Attitude and Heading Reference Systems (AHRS). Improvements have been made in hardware, firmware and software. This webpage discusses the changes.

The MTi and MTi-G have undergone a hardware revision, which has resulted in a higher temperature rating, a more robust design and the possibility to perform a self test on the accelerometers, gyroscopes and magnetometers. 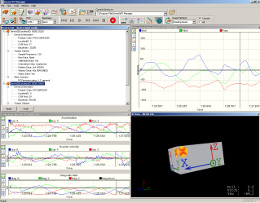 Lastly, the MTi and MTi-G benefit from the built-in self test in the accelerometers, gyroscopes and magnetometers. The self test actuates the mechanical structures in the MEMS accelerometer and gyroscope by inducing an electric signal. This allows checking the proper functioning of the mechanical structures in the MEMS inertial sensors as well as the signal processing circuitry. In the magnetometer, a magnetic field is induced by a coil designed around the component, which will generate an offset in the signal.  During self test the MT will read out all sensors and in case of a successful self test, a known offset with respect to the signal prior to enabling self test should be visible in the data. The MT will internally evaluate the sensors readings, the self test will return the status of the self test per individual sensor.

The MT SDK has been adapted for installations on Windows 7 and 64-bit processors. Next to that, the maximum output rate of the onboard processing for the MTi and MTx has doubled to 256 Hz. Via low-level communication, a maximum update rate of 350 Hz is achievable. The MTi-G has a maximum update rate of 170 Hz via low-level communication, an increase of almost 50%.

Major improvements have been made in the Xsens Kalman Filter (XKF).

More robustness against accelerations in MTi and MTx
Improvements in the gyroscopes’ stability (already introduced in hardware revision 1.4) make it possible to integrate the gyroscopes for a longer time. This makes the roll and pitch of the MTi and MTx more robust against transient accelerations. There is no change for heading. In the trial below, where the roll angle should be zero all the time, a significant improvement of almost 300% can be seen during the periods of acceleration.

A major step forward has been made in the firmware of the MTi-G.

In position, the improved modeling of the barometric baseline and the enhanced use of acceleration and GPS has resulted in a significant improvement in altitude. The green line is the altitude from an L1/L2 GNSS receiver, serving as a reference.

High Accuracy Out-of-Liquid Mass Flow Module Launched 26 May 2022
Send Inquiry To receive further information or request a quote, complete your details and a representative from Xsens will be in touch.