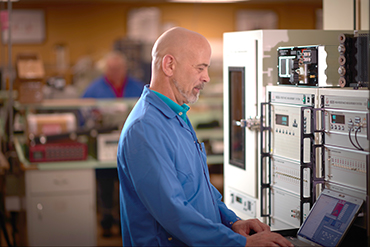 In addition to the Ratio and Extender Accreditation, other scope expansions include: low to ultra-low resistance standards, enhanced power levels to 1000 Adc for High Power Resistance calibrations, and reduced uncertainties throughout the entire resistance, voltage and low DC current ranges.

Richard Timmons, President of Guildline Instruments, stated “Guildline is unique as a non-government organization with respect to the accredited ohmic range (1 µΩ to 10 PΩ) and associated low uncertainties. The new scope for Resistance Bridge Ratio ranges fully covers Resistance Bridge Ratios from 0.1:1, 1:1, 10:1 and even 100:1, thus supporting Guildline’s widely fielded 6622A Bridge Series with the best uncertainties available. For Current Range Extenders, the Accreditation Scope will also support the calibration of Guildline’s 6623A Series which provides precision DC currents from 3 Adc all the way to our market leading 10,000 Adc model.”

Additionally, the ability to calibrate DC Shunts at higher power levels was also approved. Guildline has increased the current levels from 300 Adc to 1000 Adc, a level only very few commercial organizations can provide, and none at the uncertainties offered by Guildline.