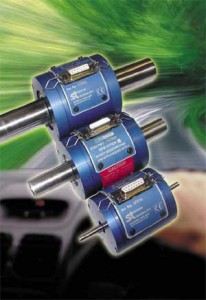 A dynamometer for testing 180 motors per hour for vehicle electrohydraulic power assisted steering, uses a non-contact torque transducer from Sensor Technology of Banbury for ensuring complete accuracy of the readings.

Installed in a Tier 1 supply company, the dynamometer forms part of a highly automated test cell that includes conveyors to deliver and remove a steady stream of motors to be tested. A robot manipulator transfers the incoming motors onto the dynamometer and after testing loads them onto the accept or reject exit conveyor.

This level of automation is crucial for maintaining the cycle time, repeatability and validity of the tests.

Normally with a dynamometer the load is applied by a hysteresis brake and there are negligible losses between these two elements. But in order to allow for the throughflow and handling of the motors the cell had to be arranged with the brake and dynamometer further apart than usual.

Connecting them was achieved using a longer than normal shaft and coupling. This introduced parasitic losses into the system, which had to be accounted for if the test results were to be accurate. An elegant solution was achieved by installing a TorqSense transducer to regularly test the torque inherent in system. The test instruments are then calibrated to account for the measured ‘offset’.

One of the key reasons for selecting TorqSense transducers for the test rig was that they do not need to be physically connected to the test piece via a complicated set of slip rings which would be time consuming to assemble and dismantle between each motor under and made the required 20 second turnaround unachievable.

The transducer used is a 1Nm RWT310 Series TorqSense, the baby of Sensor Technology’s range. This is an intelligent unit with all the necessary signal processing electronics built into its main body, giving it a plug-and-go capability that the user found very attractive.

In effect a TorqSense transducer is a frequency dependent strain gauge operating at ultrasound frequencies and consists of a piezoelectric comb mounted on the test shaft to monitor variations in its resonance frequency as the torsional load varies. An RF (radio frequency) link is used for wireless transmission of signals to an adjacent pick up so that rotation is unhindered by slip rings or to the mechanical connections.

To calibrate the cell, the dynamometer is run without a test motor to record the residual load. The calibration routine then offsets this so that the instruments read zero ready for the first test of the day.

During pre-delivery tests on the rig, careful record was kept of the measured offsets. As expected when the bearing supporting the shaft were new the offset changed markedly from day to day. But it settled down to a near constant as the bearings wore-in.

Similar records are now kept on the production floor, which show the offset to be constant for months on end after a brief settling-in period. However the quality standards and traceability now required by the automotive majors, make the TorqSense a vital operating part of the cell, as it removes any suggestion that the calibration is awry.