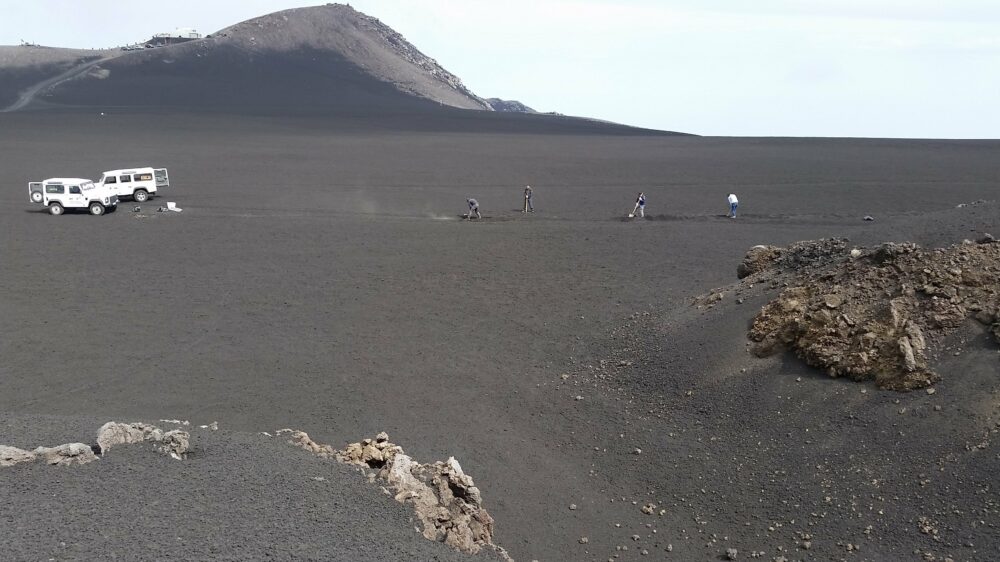 In order to better understand and predict volcanic activity, a better understanding of the diverse underground processes involved is required. A new way to detect such processes, even if they are very subtle, is to use fiber optic cables as sensors. For example, the analysis of light that is backscattered in them when the cables are deformed by vibrations has now made it possible for the first time to determine the volcanic signature of the Sicilian volcano Etna more precisely.

An international team led by Philippe Jousset from the German Research Centre for Geosciences Potsdam (GFZ) and Gilda Currenti from the Italian Istituto Nazionale di Geofisica e Vulcanologia (INGV), among others, reported on this in the Journal of Nature Communications. The method, known as Distributed Acoustic Sensing (DAS), was able to identify seismo-acoustic volcanic activity from a distance and map hidden near-surface volcanic structural features. With its high sensitivity and accuracy, it is proving to be a basis for improved volcano monitoring and hazard assessment.

The Challenge of Predicting Volcanic Eruptions

Understanding physical processes prior to and during volcanic eruptions has significantly improved in recent years. However, it is still difficult to detect very subtle triggering mechanisms of volcanic phenomena with conventional observation methods such as seismometers. On the one hand, the accuracy of the measurement methods is not sufficient to detect and identify all processes within the volcano, and on the other hand, unknown underground structures distort the observed measurement signals.

Knowledge of even weak activities can be decisive when it comes to predicting and assessing the danger of volcanic eruptions. For example, at the Sicilian volcano Etna, the largest, most active and most visited volcano in Europe, with more than one million people living on its flanks and in its immediate vicinity. Etna’s volcanic activity is characterised by frequent explosive eruptions with lava emissions.

Philippe Jousset (GFZ), Gilda Currenti (INGV) and their colleagues have now investigated the suitability of fiber optic cables for measuring very weak seismic and volcanic activity. For this purpose, the team deployed a 1.3-kilometer-long fiber-optic cable a good 20 centimeters deep in a scoria layer on Mt. Etna at a distance of about 2 kilometers from the summit craters and measured the strain changes of the cable caused by the various volcanic activities.

The Measuring Principle with Glass Fibers

The so-called DAS principle was used for measurement. DAS stands for “Distributed Acoustic Sensing”. Successive light pulses are sent into an optical fiber via an interrogator using a laser. The light, which is partially backscattered by the natural “imperfections” of the fiber, is then analysed. The travel time of the light changes when the fiber deforms or stretches – for example, due to tiny ground movements, acoustic waves or temperature changes. In this way, such events can be detected every meteralong a fiber and measured precisely.

It was already known that by means of DAS telephone lines made of fiber optics that they can be used to record earthquakes: this was demonstrated in Iceland in 2018 by GFZ researchers. This monitoring of seismic activity has been carried out at several places in the world such as the USA, Switzerland and Japan. The technique has also been applied in other geoscience applications, where ground motions or vibrations are to be measured.

Researchers have demonstrated that the method is also suitable for the accurate analysis and monitoring of volcanoes. “The cable, deployed in a scoria layer, was capable of sensing strain changes associated to Etnean volcanic activity, such as volcanic explosions, small volcanic degassing, local volcano-tectonic earthquakes, as well as to atmospheric phenomena including hail and thunderstorms,” explains Philippe Jousset, lead author of the study and a scientist in the “Geophysical Imaging of the Subsurface” section at GFZ.

The DAS strain rate measurements were validated by measurements carried out with conventional sensors such as geophones, broadband seismometers and infrasonic sensors. The locally dense measurements, unachievable with other methodologies, allow the detection and characterization of both volcanic explosions as well as the non-linear interactions of the then propagating acoustic wave with the near-surface scoria deposits, triggering resonance phenomena in the subsurface. To quantify hidden subsurface structural features in the measured data and detect and locate volcanic events with accuracy, standard volcano-seismology analysis, wave and strain propagation modelling tools, and techniques such as wave-field separation and reconstruction were applied. According to GFZ-scientist Benjamin Schwarz, who was also involved in the study, “the spatial resolution offered by fiber-optic strain measurements allows it to extract and amplify very small but important signals that were previously out of reach for quantitative analysis.”

“Our study demonstrates that DAS, with its high sensitivity and accuracy, can be used to efficiently monitor volcanic activity,” Jousset sums up. “This is a new contribution that advances the understanding of volcanic processes. And we are convinced that this technique will become a standard for volcano monitoring in the years to come,” Gilda Currenti anticipates.

Special Advantage of Fiber Optics: Most Accurate Measurements Possible even from Great Distances

Thanks to its long-distance probing capabilities – currently at least several tens of kilometers –, an interrogator can be set-up in a remote place, making fiber optic observations easier and safer than conventional sensor arrays, which need telemetry, on-site power supply and regular maintenance. “Fiber-optic cables running from the volcano’s summit to remote locations would provide unique opportunities to deepen the understanding of ground response, including estimation of path effects and aiming at better understanding the origin of volcanic phenomena,” says Lotte Krawczyk, also one of the cable diggers and spokesperson of the PoF IV research program at Helmholtz.  In addition, availability of fiber optic cable submarine infrastructure close to volcanic islands will be of great help for studying otherwise largely inaccessible submarine magmatic processes.