Innovative load sensing and monitoring technology from Sensor Technology simultaneously senses the helicopter’s position, logs the flight path, and weighs and monitors the load it is carrying. By DA Staff / 08 Jan 2021 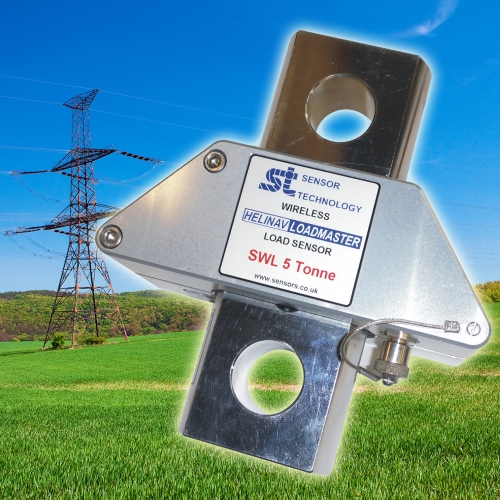 Demonstrating that the electricity supply infrastructure can be developed more quickly and cost-effectively, Heli-Lift Services has pioneered the use of helicopters to remove and deliver poles and pylons in remote locations. An enabling technology in this enterprise is an innovative load sensing and monitoring technology from Sensor Technology.

The pressures on the National Grid to deliver electricity reliably to an ever growing population are immense, with the organisation charged with building more than 200 miles of transmission connections by 2020, as well as maintaining thousands of miles of existing connections.

In recent years, campaigns to minimise the erection of traditional pylons have borne fruit, with the National Grid investing in underground cabling and developing a new T-pylon with less environmental impact, as well as announcing plans to remove electricity pylons from protected landscapes. But with the cost of underground cabling still many times that of erecting poles and pylons, the conventional approach to electricity transmission will be a critical part of energy infrastructure delivery for many years to come.

A key question becomes, then, how to erect these poles and pylons in the most cost-effective manner, in the shortest period of time, and with the least impact on the environment. This is where Heli-Lift Services of Oxford comes in, providing a unique service to airlift out old pylons, fly in the aggregates needed to prepare the ground for new pylons, and then bring in those new pylons for erection.

For example, in the first project of its kind in the UK, Heli-Lift Services played a key role in Western Power Distribution’s £12 million project to upgrade and improve the electricity supply across Gloucestershire – a project that saw the removal of some existing pylons as well as the erection of 26 new ones.

Key concerns in the project were to condense the build time, minimise crop damage on farm land and reduce disturbance to land owners. By working with Heli-Lift Services, Western Power Distribution estimated that it was able to take around 2000 lorries off the road, keeping small country lanes clear and removing the need for those lorries to access farmers’ fields.

At the same time, the timeframe to erect the 26 new pylons was condensed into just two days. The pre-assembled pylons were delivered in sections to their final locations, and carefully lowered onto pre-prepared foundations.

Capable of lifting up to 1.9 tons in a single lift over any terrain, Heli-Lift Services’ ability to remove and deliver poles and pylons has clear advantages over a static crane. But it requires a demanding combination of expert planning, precision flying and accurate operational monitoring.

The latter comes courtesy of innovative load sensing and monitoring technology from Sensor Technology, whose HeliNav TrackMaster is a simple and accurate system that simultaneously senses the helicopter’s position, logs the flight path, and weighs and monitors the load it is carrying.

At the heart of the HeliNav TrackMaster is Sensor Technology’s wireless load sensor – a strain gauge based stainless steel tension type sensor. It has the capability of wirelessly transmitting its data to a readout where it both displays live readings and records them to build up an exact profile of each operation. Its inbuilt 32MBit memory can hold up to 280 hours of data which can then be downloaded to a PC via its USB cable. The load sensor transmits using the worldwide licence-free frequency of 2.4GHz using two built in antennae.

The readouts can be cockpit mounted for the pilot’s use or handheld by an assistant on the ground (in fact, signals can even be transmitted to multiple control units simultaneously).

The controller logs the weight of the load and also the distance travelled, so that the helicopter operator can provide the client with accurate work reports and precise billing. The controller also uses an on-board GPS (global positioning system), inclinometer and accelerometer to help plot flight paths, flight times, fuel requirements, etc.

All of this gives Heli-Lift Services the operational data it needs to ensure timely inspections and maintenance are carried out on the lifting lines, and that billing is based on accurate load and distance data rather than a time-based cost estimate.

Heli-Lift Services is certainly a pioneer in the use of helicopters to remove and deliver poles and pylons to remote locations, and is unique in the UK for its ability to do so. As such, it is playing a key role in helping the National Grid to meet its infrastructure targets for the reliable supply of electricity.