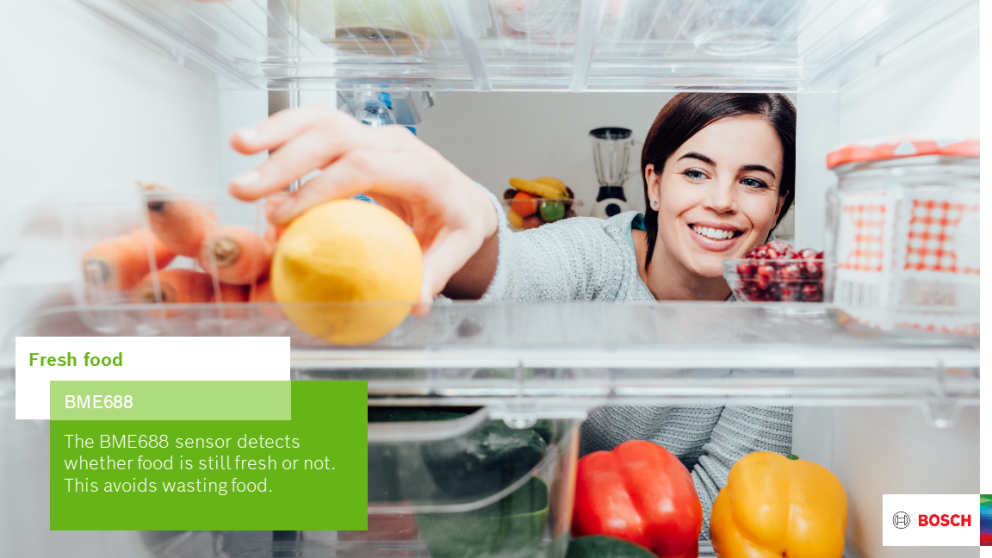 With the BME688, Bosch Sensortec has taken the super-sensitive nose of a sniffer dog as inspiration and developed a gas sensor that can, for instance, detect rotten fruit or bad breath.

The MEMS sensor is based on one of BST’s existing platforms and includes a redesigned gas sensor, as well as additional features that use artificial intelligence (AI). This enables it to measure gas, humidity, temperature, and air pressure at the same time, making it the world’s smallest four-in-one air quality sensor. The housing measures 3 x 3 millimeters and fits easily on your fingertip.

But how can a sensor detect whether a person has bad breath? It is first important to understand where the unpleasant smell comes from. Odors are created by the biological decomposition of organic material. Gases and other smelly waste products such as sulfur compounds develop during this decomposition process. “In the specific case of bad breath, hydrogen sulfides are the lead gases,” says Product and Portfolio Manager Richard Fix. “Volatile sulfur compounds are metabolic products of bacteria. The more bacteria that are present, the higher the volume of sulfur compounds.”

This means that the sensor doesn’t detect the smell, but the mixture of gases. More precisely, it can detect specific fingerprints for many different gases in the ppb range (short for “parts per billion”). These include volatile organic compounds, volatile sulfur compounds and other gases such as carbon monoxide and hydrogen. Technically, this is based on the temperature-cycled operation of the metal oxide sensor element: The sensitivity strongly depends on the current temperature of the sensing layer, since there are completely different chemical reactions happening at different temperatures.

By scanning with different sensitivities, characteristic fingerprints for different gas mixtures are obtained. To classify those fingerprints, machine learning algorithms are a key technology. It is simply impossible to analytically describe the surface reactions in real air. In fact, this way of gas sensing is enabled by using neural networks.

Odor Training for the Sensor

Before the sensor is ready to be used, it is trained like a sniffer dog. “This means that you have to expose the sensor to the gas mixtures and train it,” says Fix, who holds a PhD in ­physics. The sensor was exposed to a number of different gases in an a laboratory. An AI algorithm was then derived from the generated data sets that makes sure the sensor recognizes these gases and correctly assigns them. Once the sensor has been fully trained, it is then ready to be used in a wide variety of applications, such as detecting whether someone has bad breath or whether food has spoiled, as well as dirty diapers and forest fires.

As the Product Owner, Aibin Paul Lazar was responsible for developing the sensor’s software. He explains how the training works using the example of detecting forest fires at an early stage. “The focus here is categorizing the various situations and collecting data.” Forest fires, for instance, create and release gases such as hydrocarbons, carbon monoxide, hydrogen, and nitrogen oxides. “The sensor needs to be exposed to the typical emissions of a forest fire so that it recognizes these and can collect data,” he says. From now on, the sensor will automatically detect the gases released in the event of a forest fire and can be integrated into early warning systems.

In addition to the gases that are released, the sensor also measures humidity, air pressure, and temperature, and creates a comprehensive AI model from these additional data sets. In the case of forest fires, for example, humidity, air pressure, and temperature can play a role because this creates a climate map for the entire forest area. This type of map plays a crucial role in an early risk assessment.

Artificial Intelligence for Everyone

Thanks to the AI features built into the sensor and the BME AI-Studio software program, customers can quickly and easily develop solutions for their own use cases. “The program is so easy to use that you don’t need to be an AI expert,” says Fix. The only thing that the customers have to do is match the sensor with the use case, collect the data, and enter it into the program. The software then takes care of developing the AI model. Lazar is confident: “That’s the great thing about this product – it’s so simple that anyone can use it.” Once the training is complete, the finished AI code is transferred to the customer’s end product.

The BME688 has been on the market since the beginning of the year and is being used by a number of pilot customers. The sensor has already been integrated into a Bosch product: spexor, a mobile security assistant from the start-up platform grow. The air-quality sensor measures the proportion of volatile organic compounds in the air. If the air quality decreases, it sends an alert via an app and LED traffic light technology that it’s time to ventilate. Detecting, recognizing and displaying odors – the sensor shows just how a real sniffer works.

Training in the AI studio: an Example of how the Sensor Learns