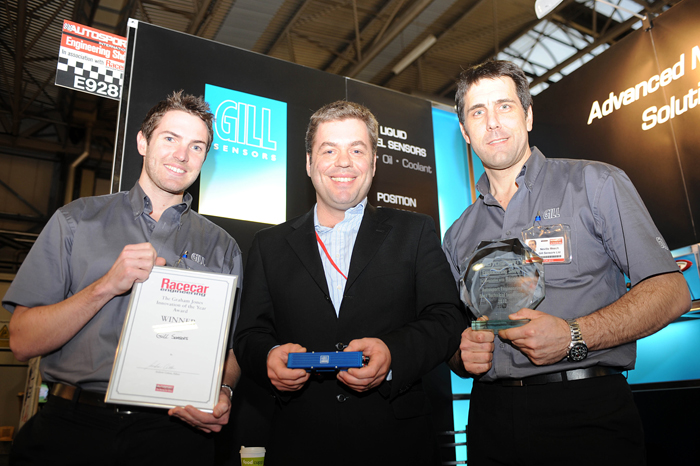 Gill Sensors has won the Autosport Engineering Best Technical Innovation 2012 and the Graham Jones Innovation of the Year Award, which were both presented during the Autosport International show in Birmingham, UK on 13th January 2012. The prestigious awards go to the new Ultrasonic Fuel Flow Meter, which has recently been launched in Europe and America and marks a major step forward for fuel flow monitoring in race car applications.

“As focus within top level Motorsport moves towards fuel efficiency, accurate monitoring of fuel usage is rapidly becoming an essential element of most telemetry systems”, says Mike Rees, Head of Marketing at Gill Sensors. “The Gill Fuel Flow Meter has been designed specifically to address these requirements, providing governing bodies, race teams and engine developers alike with a means of accurately monitoring fuel flow and usage in real time”.

The Ultrasonic Fuel Flow Meter uses Gill’s proven ultrasonic measurement technology to detect bi-directional fuel flow rate to 0.3% accuracy in real time. This technology has a number of major advantages over impeller flow meters, the most significant of which is the removal of mechanical parts from the flow path. This ensures minimal pressure drop across the meter, providing true flow rate data with little impact on the flow itself. The removal of mechanical moving parts and bearings also eliminates mechanical damping and allows much higher temporal resolution and accuracy for the capture and measurement of high frequency pulsating flows.

The detail provided within the flow data allows engineers to fully analyse fuel flow characteristics, with the meter’s high level of sensitivity allowing even the pulses of individual fuel injectors to be identified at low RPM limits.

The Ultrasonic Fuel Flow Meter has been designed for use with all race fuels, including aggressive ethanol blends, and is capable of accurately recording flow rate from 0.5ml/min to 6500ml/min. With no moving parts to jam, break or wear out, the meter provides extremely reliable operation even in the harshest of operating environments.

The meter features a newly-developed electronic platform, which integrates the latest FPGA technology capable of measuring flow rate up to 4000 times a second. In addition to a digital output, a 0-5V analogue output is provided across the calibrated flow range.

The Gill Ultrasonic Fuel Flow Meter has undergone a series of dyno and car tests to date, including a day’s testing on a Core Autosport LMPC race car at Palm Beach International Raceway in December 2011. Another series of high profile car and dyno tests are scheduled in Europe and America throughout January and February 2012.