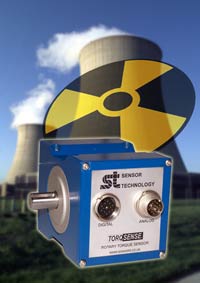 A test rig built at Centa Transmissions in Shipley is allowing the company to guarantee that the precision gearboxes it supplies to nuclear industry will never fail prematurely.

Despite its critical role, the rig is essentially quite simple, in that a motor drives the test unit against a load created by one of Centa’s own industrial disc brakes. The test runs initially for three hours at the full working load, and then is increased to 300 percent load for another hour. At the heart of the rig is a non-contact sensor that constantly monitors the torque in the gearbox, generating a performance profile that can be compared with the ideal performance standard.

The sensor is a TorqSense unit, as developed and made by Sensor Technology in Oxfordshire. Because it is a non-contact, the TorqSense does not create a dynamic load, which has to be accounted for in the analysis of the output signal.

“The output reading we get is a true refection of the performance of the gearbox, we don’t even have to allow for a constant offset,” says Michael Sykes, MD of Centa Transmissions. “This means our calculations, which we share with the client, inspectorate etc, etc, are very simple and easily understood even by non-technical people.”

The duty the gearboxes are destined for takes place in an environment where reliability has to be 100 percent. They are used in completely automated scoop mechanisms, which collect small amounts of ‘high-activity liquor’ from the reactor cooling systems, which is sealed into thick-walled ceramic flasks for long term storage until the radioactivity has decayed to safe levels.

“This is at the very core of the nuclear plant where a component or system breakdown would mean shutting down all operations for months, automated/unmanned removal of the faulty parts, sealing into a secure flask and automated installation of a replacement. The cost would be millions of pounds – at the very least. To avoid this everything has to be life time guaranteed to demanding criteria.”

Instead of making physical contact with the output shaft of the gearbox TorqSense use uses a radio frequency (RF) link. This picks up signals from two piezo ceramic combs glued onto the shaft, which vary as the combs deflect under the effects of rotation. As the torque increases the combs change their electrical resistance proportionally to the change in frequency of the Surface Acoustic Waves (SAWs) caused by the rotating shaft.

“The combs function as strain gauges that measure changes in resonant frequency of the rotating shaft,” explains Sykes. “The really clever bit is that the RF coupling is used to supply power to the strain gauges – being piezo based they need less than one milliwatt of power, which is transmittable as a radio wave.”

Thus Centa’s rig does not need any slip rings, the effectiveness of which is difficult to maintain during extended and/or demanding test run duties. Other advantages inherent with SAW technology, and therefore TorqSense, include no load imparted to the drive mechanism under investigation, a broader signal bandwidth than other analogue based technologies and elimination of electromagnetic interference.

“Simplicity is a great virtue for the nuclear installations,” maintains Sykes. “There is less that could go wrong, maintenance is easier, inspections and approvals are simpler. In this respect, both our test rig and Sensor Technology’s TorqSense are ideal for the industry.”