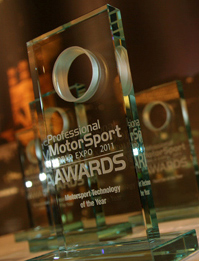 The concept of predictive lap timing is not new, but until very recently racing drivers have found the traditional methods of comparing laps based on rolling distance or time too inaccurate to rely on. Racelogic have designed a driver display that uses high accuracy GPS position to predict lap times in real time – an innovation that earned the Buckingham based company PMW’s coveted Motorsport Technology of the Year Award.
Racelogic’s founder Julian Thomas said: “When we first experimented with Predictive Lap Timing using GPS position, we quickly realised we were onto something big. We have never seen such a positive reaction from drivers to a new technology such as this.”

Julian explained: “It works by showing the driver a constant real time comparison of their current lap with their previous best, at 0.1s accuracy. This means they can try out different techniques or lines and instantly see the effect they have on their overall time.” 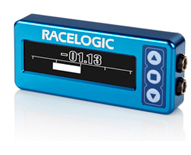 “Racing drivers love an edge, and this system appears to give them an advantage not only in finding raw pace, but also in maintaining consistency. Many drivers now refuse to race without one, and a large number of this year’s championship winners have been using our system. One customer, whilst on the last lap, backed off slightly and then saw on the display that he was in fact going quicker, so he carried on and set the fastest lap of the race.”

He added: “We’re delighted that the PMW panel have selected our Predictive Lap Timer for the Technology of the Year Award!”

The predictive lap timing display is designed to work with Racelogic’s Video VBOX, which combines footage from up to four bullet cameras with a 10Hz GPS data logger and graphic overlay.

Andrea Toso, Technical Director of Dallara Autmobili and one of the judges on the Professional Motorsport World panel, said: “This technology represents innovation through cross-fertilization from other fields. Racelogic has been able to combine proven technology (GPS) to produce innovation to satisfy an existing need. Too often we see potentially great innovations to satisfy non-existing requirements.”

With these types of systems fast becoming a permanent fixture in many front running cars, many motorsport enthusiasts are now recognising the full potential of GPS based driver aids.