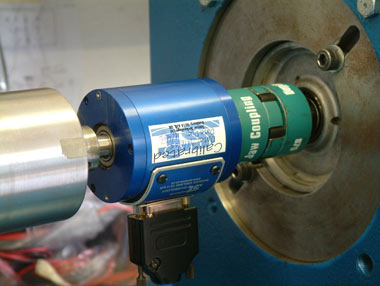 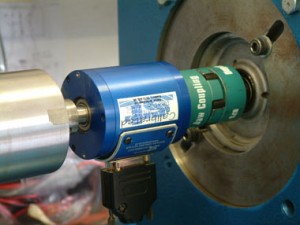 Research at the University of Manchester has demonstrated servo systems with vastly improved dynamics with the most challenging of loads. The key to the increased performance is a torque transducer from Sensor Technology employing Surface Acoustic Wave (SAW) techniques to deliver high-bandwidth, non-contact solution.

The ease of set-up of modern servo drive systems, combined with steadily reducing costs, has made servo control an attractive proposition across the spread of motion control applications in a wide range of industries. Despite the developments in inverter technology which promise near-servo performance, in the most demanding applications requiring the fastest response and the most precise control of position, velocity and torque only true servo systems can cut the mustard.

The ease of access to servo technology, and the steadily increasing capabilities of servo controllers, has seen machine designs pushing the boundaries ever further, with faster system response becoming an increasingly common industrial requirement.

With a perfect load, this would not represent a problem. But no load is perfect. Practical mechanical drive systems can be complex, incorporating several non-still interconnecting shafts and elastic couplings, all characterised by a dominant resonant frequency. Fast impulse signals from the servo controller excite torsional resonances through the drive train, leading to controller instability – particularly badly as the servo controller bandwidth approaches the resonant frequency of the load.

This torsional resonance, then, is a significant factor which limits the ultimate dynamic performance achievable by even the best servo systems. In looking to damp these oscillations, the obvious answer is to measure and control the torsional resonance using shaft torque feedback techniques, but traditionally this has proved something of a challenge. The lack of reliable, low-noise, low-cost shaft torque transducers that are non-invasive to the mechanical drive system have precluded the use of direct torque feedback in all but a minority of specialises closed-loop servo drive systems.

Conventional torque sensors employ a torsion bar to translate torque into a relative large mechanical movement that can be measured by a potentiometer, capacitive, inductive, magnetic or optical angular position sensor. Alternatively, the strain produced by the torque on the surface of the torsion bar can be measured using piezoresistive or piezoelectric strain gauges. The need for the torsion bar is a compromise in itself on the system design, making the transducers too mechanically compliant in many servo drive applications. But a further issue is that many designs require some form of mechanical stop, whilst a number of the sensors need a mechanical connection between the shaft and the interrogation unit. This adds to the complexity and cost of the sensor.

Now, though, research in the Power Conversion Group at Manchester University, led by Dr Nigel Schofield, is focusing on the use of a non-contact torque measurement system developed by Sensor Technology. Based on Surface Acoustic Wave (SAW) technology, the TorqSense transducers provide a low-cost torque measurement solution for brushless servo drive-system applications, providing active damping and/or resonance ratio control.

Using the SAW based TorqSense transducer, it is possible to accurately measure instantaneous shaft torque from the various mechanical components of the drive train induced by the fast transients from the controller.