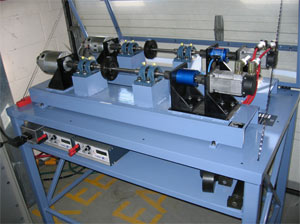 A TorqSense transducer is helping ensure the reliability of powered wheelchairs, scooters, golf buggies and other electric vehicles, having been incorporated into a dynamometer rolling road built by PG Drives in Dorset.

PG Drives manufacture black box electronic motor controllers for chair and vehicle builders around the world. Reliability and robustness are paramount as their duty cycle is so unpredictable. Even the least adventurous users are likely to ‘go off road’ occasionally, get caught in the rain, tackle a big hill up or down, or find themselves needing to carry a large load.

The rolling road was built earlier this year to measure the torque between the motor under test and the inertia network it is driving, which is simulated by selective use of both passive and active loads. The TorqSense transducer, manufactured by Sensor Technology in Banbury monitors the motor’s performance by constantly measuring the torque at its output shaft and feeding a data stream out to a computer for logging and analysis.
TorqSense is a non-contact transducer that uses Surface Acoustic Waves (SAWs) as frequency dependent strain gauges to measure changes in resonant frequency in the motor’s drive shaft as the test programme is run. A wireless radio frequency coupling is used to transfer the data signal to a pick-up head.

The same coupling is used to supply power to the strain gauges, possible because the gauges are based on piezo technology so need less than one milliwatt of power. This arrangement does away completely with the difficulties of fitting slip rings and maintaining their contact quality throughout an extended test run.

TorqSense embraces all the advantages of SAW technology, including no load imparted to the drive mechanism under investigation, a broader signal bandwidth than other analogue based technologies and elimination of electromagnetic interference.

“We often run arduous test regimes for 10 hours or more until the battery is flat,” says Dr Richard Gears of PG Drives. “We always have the rig manned for safety. With large currents being generated and the motor regularly overloaded, we can’t risk lights-out overnight testing.”

The procedures can simulate on and off road, every type of surface, steep gradients, gentle gradients, all sorts of extreme weather, heavy loads, shock loads and every other anomalous behaviour you can imagine. Until last year the analysis regime was based on test driving around the town, but consistency and repeatability were, of course, impossible to achieve. “The rolling road has been used constantly since we built it, so its reliability is a much as issue as that of our controllers in the field. Looking back, I don’t how we ever managed without it.”